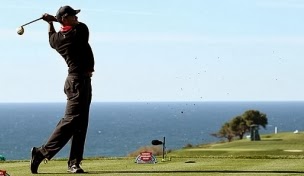 This week marks the 10th event of the 2013-14 PGA Tour season, as players take on Torrey Pines at the Farmers Insurance Open. A field of 156 players will tackle the North and South courses, with three of four competitive rounds played on the South, which hosted the U.S. Open in 2008.

World No. 1 Tiger Woods makes his 2014 debut as he defends the title he won last year by four shots over Brandt Snedeker and Josh Teater. Here are 10 players to watch this week in San Diego:

1. Tiger Woods: A heavy favorite this week, and for good reason. Woods has won this event seven times - including last year's romp - in addition to his U.S. Open title on the South Course seven years ago. He tends to thrive amid friendly confines, and Torrey Pines certainly qualifies.

2. Brandt Snedeker: Tiger may own Torrey, but Snedeker has had a pretty successful run in San Diego himself, notching four straight top-10 finishes. The former FedEx champ followed his 2012 win here with a runner-up showing last year, and also tied for second in 2010 to go along with a third-place finish in 2007.

3. Phil Mickelson: Mickelson displayed some classic signs of "Phil" golf en route to a T-2 last week in Abu Dhabi: often brilliant, sometimes puzzling, but at the end of the week still better than most. Now he returns States-side to an event where he has recorded 10 top-10 finishes in 24 career starts, including three wins (1993, 2000, 2001).

4. Rickie Fowler: Fowler tied for sixth here last year and has yet to finish outside the top 20 in four career Farmers appearances. After a sluggish start, he bounced back to post 67-66 over the weekend in Palm Springs and now will look to carry that momentum into an event where he has had plenty of past success.

5. Hunter Mahan: Mahan hasn't logged a start yet during the 2013-14 season, but Torrey Pines should prove to be a friendly venue on which to make his debut. Mahan has cracked the top 15 here four of the last five years, including back-to-back T-6 finishes in 2011 and 2012.

6. Bill Haas: Haas shot 67 or better in each of his four rounds last week en route to a T-6 at Humana, and now heads to a course where he has finished inside the top 10 each of the last three years. The former FedEx Cup champ tied for fourth at Torrey in 2012 and has shot par or better in 18 of his last 20 rounds in San Diego.

7. Jason Day: The Aussie is making his first start of the 2013-14 season and still carries the momentum from an emotional win at the World Cup in November in front of the home crowds. A mainstay on leaderboards throughout 2013, Day tied for ninth at Torrey a year ago on the strength of a final-round 66.

8. Jordan Spieth: Spieth showed he was human in Honolulu, where he missed the Sony Open cut, but is likely to bounce back this week in California. He also missed the cut here last year in his season debut, but over the interim 12 months has been one of the hottest golfers around. A runner-up earlier this month in Kapalua, the 20-year-old should find more success this time around.

9. Jimmy Walker: Known for years as one of the more consistent players on Tour, Walker is now a proven winner and hoisted the trophy in his most recent start in Hawaii. The Texan has notched back-to-back top-10 finishes at Torrey Pines, including a T-4 last year.

10. Charles Howell III: Time is quickly running out for Howell to make an early-season move in the OWGR, but the veteran has had prior success in San Diego. Howell already has four top-10 finishes to his credit this season, including a T-8 two weeks ago in Hawaii, and his T-9 last year was his fifth top-10 finish at Torrey Pines in 11 career starts.